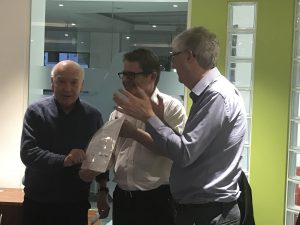 Gareth has been a party member for over half a century; growing up in Port Talbot, Gareth has campaigned in no-hope areas (Monmouthshire and Dorset) as well as in Labour strongholds in Cardiff. He is a stalwart in his local branch (Riverside) and it would not be an exaggeration to say that the branch would struggle to run without him. He has been an officer at both branch and constituency level; he recently stood down as branch chair but continues to play an active role in our CLP Executive Committee. Gareth coordinates the majority of Riverside branch campaigning, having worked tirelessly in council, Assembly and Westminster elections and spending many sleepless nights in more counts than he can probably remember!

Gareth also plays a key role in organising and participating in our CLP fundraisers and social events, acting as a key contact in the local branch. Gareth is further a champion of diversity and inclusion; in one of our more ethnically diverse wards, Gareth plays in active role in engaging with the local BAME community alongside supporting young members who join to get involved in local campaigning. Few people in our constituency, perhaps across the whole of Wales, will have knocked as many doors as Gareth; he is out at all times and in all weathers, while Anne, his wife, coordinates all of our telephone canvassing as a constituency.

We congratulate Gareth on winning this award!