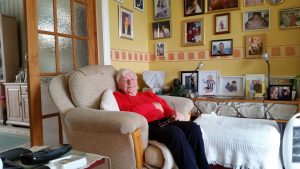 Bryn Devonald was born in 1934 in Haverfordwest.  During the Second World War, when his father was called up into the Royal Air Force, Bryn and his mother went to live with his grandmother in Porth, where his grandad was a miner, and he attended school there. They returned West on his dad’s return in 1945 and Bryn continued his education in Milford Haven.  At 14 he became apprenticed to a printer there and after being called up at 18 for a two-year spell of National Service in Kent finished his apprenticeship in 1956. He got a job in poster work at Wilson’s of Leicester but soon moved to a better-paid job with the Leicester Mercury where he stayed for three years before returning to Wales in 1960, first to a job with McLay’s, then in Fairwater, and ten years later to the Western Mail and Echo.  Since coming to Cardiff Bryn has always lived in Cardiff West, moving to Ely in 1967.

All print jobs were dependent on union membership (starting with the Typographical Association, Bryn stayed in the same union through many amalgamations and is now Vice-Chair of Unite Retired Branch in Cardiff) and he soon became a union activist and shop steward, leading to involvement with the Labour Party, which he joined in 1983.  As printing processes changed, Bryn was made redundant in 1990, getting as a parting gift his shop steward’s whistle, but he continued for several years to work in the union office one day a week.

As a member of Ely Branch Labour Party Bryn worked with the late Councillor Charlie Gale on many political and community campaigns, including organising the annual Dic Penderyn commemoration at Cardiff Market, the Ely and Caerau Festival, and working with the CAB on setting up the Ely Credit Union, now part of Cardiff and the Vale Credit Union, where Bryn served as a director for twelve years.  Bryn and Charlie could often be seen at meetings, conferences and demonstrations, providing sound support, and they were active in the 1997 Yes for Wales campaign. Bryn served for many years as Ely BLP Secretary (he is currently its Vice Chair) and has long been a Co-operative Party delegate to Cardiff West CLP.  In 1990, another late Ely BLP member, Tony Stewart, invited Bryn to help out at Rhodri Morgan’s Saturday surgeries – and to this day Bryn is door clerk at Mark’s surgeries every fortnight and often at Kevin’s in between.  Saturday involvement led to a part-time job in Rhodri’s constituency office, with the odd conference trip for light relief.  Bryn’s attempts to reprise with Rhodri his National Service job of batman, and ensure a succession of ironed shirts and well-pressed suits, never met with much success, but Rhodri did wear Bryn’s fur hat on a trip to Moscow, and also wore throughout his second leadership campaign a red tie with a Welsh dragon motif glimpsed on Bryn’s office desk.  Indeed, Bryn met on holiday in Australia a woman originally from Wales who reported that she had seen Rhodri wearing the very same tie in Canberra!  Rhodri was grateful also for Bryn’s expertise in poster design – What it is, Where it is, When it is – for event organisation.

Rhodri’s leadership campaigns provided a diversion for the London media, and the incident that stands out for Bryn was the night Rhodri bested Jeremy Paxman on Newsnight – “Will you run again for leadership of the Welsh Labour Party?”  “Do one-legged ducks swim in a circle?”  – which sent Bryn to Howell’s store to buy a porcelain duck for Rhodri’s mantelpiece.  Bryn remembers also the “wake turning into a dance” that was the night of 18thSeptember 1997 at the Park Hotel in Cardiff when devolution was won by 6721 votes.

Bryn and his wife June’s family includes six great-grandchildren.  They enjoyed holidays and family time. Bryn saw the turns taken by his career as being down to being in the right place at the right time, and the vast amount of party, union and community work he has done as putting something back.

Bryn sadly passed away earlier this year. The Cardiff West General Committee passed the following motion in his memory:

We resolve, first, to send a donation of one hundred pounds to Cancer Research UK, the body designated by his family as the recipient for donations, and, secondly, to instigate a Bryn Devonald Memorial tradition, whereby each Cardiff West delegate to Labour Party conferences will receive an additional £10 with their expenses payment, to be spent in the conference tearoom on a hot drink and a snack while remembering the fine example set by Bryn to present-day members of our Party.